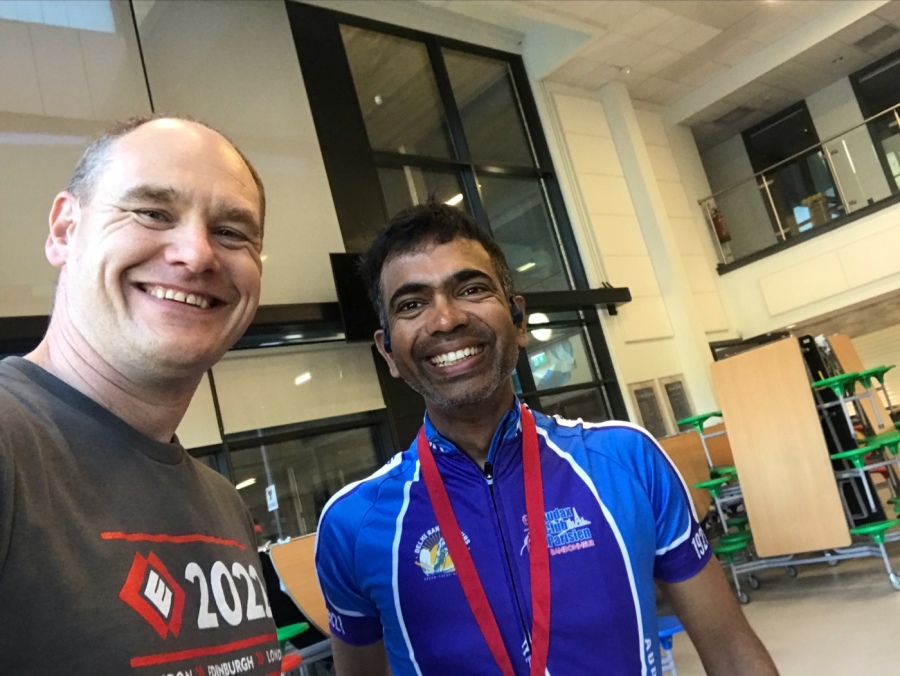 Was woken up from my slumber by the ever helpful volunteers and the call from command center. Was up and about in a flash. Wanted to be doubly sure that the bike is okay and ready to roll.

Met up with Ed, once again, he had been up all night helping the riders. Kudos to these amazing volunteers!! He confirmed that the bike is primed up and I wouldn’t face any challenges. He complimented that am chirpier than previous night. I acknowledged heartily.

What a night of sleep and peace of mind can do to you .

I was late as compared to what I would have wanted but was absolutely grateful to be able to ride and confirmed with the command center about the ride plan for the day. We were on an easy path for today with lower target speeds so I had a good chance to claw back the lost time and get back in the play.

Stopped for a few moments at the Humber bridge to soak in the surreal beauty of the sun shining brightly on water.

Sun was getting brighter by the minute and day was getting hotter. Thankfully, today I had decided to ride the Brits do, i.e. considering that it is summers so ride in summer kit and let cold, if any, not be a botheration. It helped.

It was getting hot, really hot. I could feel that my nose had got totally sun-burnt. Hydration was becoming more and more important but the adrenaline rush of getting closer to the finish line kept the momentum and energy level up.

Rode almost non-stop to Boston but this time with additional time spent on absorbing the beautiful sights on either side of the road in Cambridge. Had some good company with a British rider, who was doing his 2nd LEL and riding quite strong. We chatted up a little but rode quite hard along each other and consequently did the segment faster than what I would have imagined on the 5th day of the ride.

Met up with Coach Rohan and bade bhaiya and got to know that Coach had developed Shermer’s neck and is having a bit of challenge riding. Assisted in whatever way I could (it was very limited though) and with some ingenious techniques of Sanjeev, Coach was out of the CP riding once again, albeit much slower than what he usually rides. Time was on his side so the sleep didn’t quite matter but getting to the finish line did.

I re-fueled well since the next segment was the longest one remaining now and if luck went against me, could experience strong head winds there, so would have needed every joule of energy in the body.

This was potentially another make or break segment with its notorious head winds but good for us they remained mostly cross winds except small patches, where the breeze hitting your face was absolutely welcome. It was indeed the flattest section of the ride and road was nice and smooth. Distance was a big one but rest of the factors were favorable.

Command center was keeping a close tab on the progress and was confirming periodically that am doing good speed and should continue to ride strong and NOT do anything silly. Also exchanged wishes of Rakshabandhan. This was the weirdest but coolest Rakshabandan, ever.

Crossing a beautiful church on my way to St. Ives, local time 1820 hrs

Finally, arriving in St. Ives, still some distance remained for the CP, though.

This was now getting within reach. Just 120 kms remained to be covered with about 14 hours remaining. May be would try to cover it tonight itself and then sleep at Debden or perhaps would get to Great Easton and rest for a few hours and then head to Debden.

For now staying focused and continue riding strong was important.

Started off from St. Ives towards Great Easton and after crossing the city, church was soon riding along the bus route, where the bus was running on rails. It was a long track, a very long one and made it appear that one is going to cover the entire distance along this itself.

It was dusky and there were lot of insects buzzing around. I had put on my wind jersey which was getting stuck to my arms and was getting very uncomfortable. So took a short break to change into the right gear and realized that I had forgotten to refill water.

One thing that I had learnt on this ride, that there are very few places where you can buy stuff, while riding through the country side and it gets even more challenging while riding in the night / dark.

There was not a shop or a soul for miles ahead.

Cajoled myself that anyway it’s evening, I’ve just had water and can ration available water and the ride would take about 4 hours so can live with it. Didn’t quite believe it but there was no option so continued to ride.

In the dusky darkness caught up with a bunch of 3 riders and joined them. They were all from UK and were super comfortable with the rolling terrain, traffic, cycling lanes, navigation etc. so decided to just follow them as far as I could. I was often getting dropped but would pull a little harder and they also went a little easy so that I could stay with them.

At some point one of the riders (Barry Lewis – F19), was taking a short stretch break so the group waited and I requested them to wait for a few moments more where I try to get some water from one of the pub. It was about 2300 hrs and perhaps the last chance to get something as the places were closing for the night. With this water re-fill, was mentally at peace and all that mattered thereafter was to just keep pedaling.

With every passing kilometer and every climb it was becoming evident that it would be more sensible to stay put at Great Easton for the night and then start early next morning.

Passing through some loose gravel roads, in pitch darkness and on downhills, cemented this idea completely.

Finally at 40 minutes past midnight, checked in at Great Easton.

While I didn’t complete all the segments to get to the finish line, but had done reasonably well in terms of speed, time during the rides and most importantly at the controls.

Just one more control to go and it would be done and with these thoughts, went off to sleep with a wake up alarm of 5 AM.

One thought on “LEL Chronicles – Day 5” 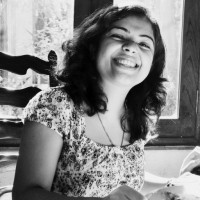